When Someone Hurts You: Part 2

As I was praying for my precious friend whose husband was unfaithful to her and had deeply wounded her, the Lord gave me a vision of her husband. First, let me say that her husband is a charismatic man who at one time had been a bold evangelizing believer, but over the years had become consumed with building his career and that, along with making his son’s sports events a priority, had led him to drift away from spending time with God alone as well as with the fellowship of believers.

The vision the Lord gave me was of a battle in which he was the target of a major assault and rapid fire was coming his way.He was attempting to fight off the enemy, but he had failed to carry his weapons with him. Part of the enemy’s strategy was to get him off by himself so that others in his unit couldn’t help him. In addition, he wasn’t making use of the communication device that had been issued to him in order to keep him in contact with his Field Commander. He was doing the best he could on his own to withstand the enemy, but he was no match for the enemy’s attack.

Unequipped with the necessary weapons for warfare; away from his unit; and no longer in communication with his leader; he was a ‘sitting duck’ who was easily taken captive.Next, I visualized him being led–head down and looking very defeated–in a long line along with others who also had fallen prey to the enemy. Once in the enemy’s camp, rather than being dressed in his army’s uniform, he had on the grey and white striped clothes of a prisoner of war (POW). He was being brainwashed to believe the lies of the enemy and to doubt what he had known to be truth.He was in desperate need of someone to intercede for him and to intervene to get him released from the clutches of the enemy! 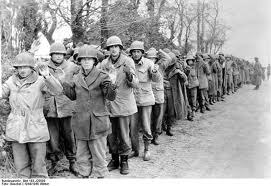 That vision reminded me that every one of us is living in a spiritual war zone, whether we realize or not. We too will be taken captive by the enemy of our souls, Satan, if we are not prepared for the daily battle we face. We must put on the whole armor of God (Ephesians 6:10-18), remain with a Body of faithful believers who will fight with us against the enemy, and remain in continual communication with Jesus, our Commander in Chief through pray. You can expect yourself or your loved ones to be taken captive by Satan if you or they are not going into battle protected and in close communication with God and the Church; it is inevitable. “Therefore My people go into captivity [to their enemies] without knowing it and because they have no knowledge [of God].” Isaiah 5:13a

When someone sins against you, rather than allowing the enemy to take you captive by the sin of unforgiveness, resentment and bitterness, respond as Jesus did on the cross, “Father, forgive them for they know not what they do.” Visualize that person as being taken captive as a POW who is powerless to withstand the enemy. Realize: unarmed soldiers who aren’t obeying their commander and are operating as a “lone wolf’ will fall prey to the enemy.Realize also that Satan, the enemy of their soul, seeks to rob them of the abundant life and to destroy them for all eternity as well as to use their offense against you to rob you of your joy, your intimacy with God, and your witness for God’s kingdom.

Rather than succumbing to sin for the wrong done to you, do as Jesus has commanded us to do: “Love your enemies and pray for those who persecute you.”(Matthew 5:44) Your intercession is vital to free them from the grip of the enemy. It is the goal of God that every believer be conformed to the image of Christ and to live our lives in accordance with His will and to emulate the example Jesus laid down for us. And what did Jesus do? He came to ‘set the captives free’ (Luke 4:18), He died for us“while we were yet sinners”, and He lives ‘to intercede’ for us (Hebrews 7:25).

What difference would it make in your life if you saw every offense against you as being committed by someone who is a brainwashed POW of Satan?What if you prayed for him or her rather than giving vent to your anger against them? How much more would that be consistent with Christ’s desire for you than how you usually respond when you are hurt by others’ sinfulness?

No Magic, Just Mercy
12 Gifts You Have Because Jesus Died and Rose for You!
Are you "Dying" to Please Others?