Do You Really Know God? And Why Does It Matter?

I remember overhearing a conversation in which someone made a false statement about a friend of mine.I knew my friend very well; I knew the other person didn’t. I said, “That’s not true.I know the truth about her.” Although not knowing the truth about my friend might only have affected her reputation, not knowing God and the truth about Him will cost you your very life.

Just like that person who had a false image of my friend, many people—even many professing Christians—have a false image of God; they worship a god of their own creation who does not reflect Who He has revealed Himself to be in His Word and through His Son Jesus. Creating a god of our own making is sin; it’s idolatry.

God longs for us to know Him. What we know and believe about God’s character, His nature and His ways is the most important thing about each one of us. Whether or not we know Him will mean the difference between eternal life and eternal damnation. “Now this is eternal life: that they know you, the only true God, and Jesus Christ, whom you have sent.” John 17:3

As Christians, we cannot expect those outside of the Church to know God.In fact, Jesus has commanded us to make Him known to others. (Matthew 28:19) But it is crushing when those who claim to know Him demonstrate they don’t understand the essence of Who God is and what Christianity is all about. 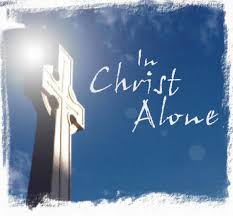 This was brought home last week when the Presbyterian Church U.S.A. chose to remove one of my favorite hymns, “In Christ Alone” from its new hymnal because they don’t approve of the lyrics “On the cross where Jesus died,the wrath of God was satisfied.” Gratefully the hymn’s writers refused to appease the committee by changing the lyrics to read, “…as Jesus died, His love was magnified”. It was reported that the PCUSA didn’t want “to suggest that Jesus’ death on the cross was ‘an atoning sacrifice’ needed “to assuage God’s anger” over sin.” *

This reveals they have created a false god in their own image. Yes, God is Love. (1st John 4:8), but He is also Holy and Just.And what makes His love so utterly amazing is that mankind is so undeserving of His extravagant love!If we fail to comprehend that we “all have sinned and fall short of the glory of God” (Romans 3:23) and therefore deserve God’s wrath, and that the only way to escape His wrath is through faith in Jesus’ sacrificial death on the cross, then we miss out on the entire meaning of Christianity. “He who believes in the Son has everlasting life; and he who does not believe the Son shall not see life, but the wrathofGod abides on him.” John 3:36.

I pray that those in the Presbyterian Church U.S.A.— and all who have a false image of God— would dig deeply into His life-transforming Word, the Bible, which alone reveals the truth of who He really is.Then they will come to know this Holy God Whose perfect justice and wrath could only be satisfied by the death of His Beloved Son, and Who loved us so much that He provided the “Perfect Lamb of God” who alone could atone for our sin. “For He made Him who knew no sin to be sin for us, that we might become the righteousness of God in Him.” (2nd Corinthians 5:21) It is indeed “In Christ Alone” that God’s wrath is able to be satisfied!

Are you worshipping the God of the Bible, or a false image you have created of God? Have you put your faith in what Jesus did on the cross on your behalf so that you know you are justified by His shed blood, and that instead of facing God’s wrath you will experience the vastness of His love for all eternity with Him in Heaven? Do you believe the words of “In Christ Alone” with all your heart?

What We Christians Must Do: Final Blog in series 'America: The Cause of Our Decline and a Clarion Ca...
All Things Are Possible
From Restless to Resting