The other day my 13 yr. old son walked up to me and said…

Son: “Mom, there was a kid at lunch that asked if he could borrow $2 for a hamburger, I told him ‘yes’ and that I expected he would pay me back when he had some money and now he won’t pay me back even though I know that he has the money.”

Me: “Well, when you loan someone money, you have to measure that risk; it’s always possible that people may not pay you back.”

Son: “I get that, and I did have a little bit of a bad feeling about it.”

Me: “That ‘little bit of a bad feeling’ was most likely the Holy Spirit warning you and letting you know that he was not a trustworthy individual.  That’s why you need to be sensitive to that small voice in your spirit, that way if you still choose to give him the money, you would be doing it expecting that he would not pay you back.

Son: “Well, I’ve asked him to pay me the $2 back every day so far this week (it’s Friday) and earlier this week he and his friend were teasing me asking ‘what are you going to do with that whole $2 when you get it?’ and being really rude about it.  Then today, they gave me this because they know I’m a Christian and that I’ve talked about Jesus at school before…”

I look down to see a handwritten note on a piece of torn paper.  That’s when my son explained with a disappointed face…

Son: “The kid I loaned money to and his friend said they thought I would like this more than the real money he owes me and they made-up fake money they called ‘Jesus Dollars’ and gave it to me while laughing and mocking me.” 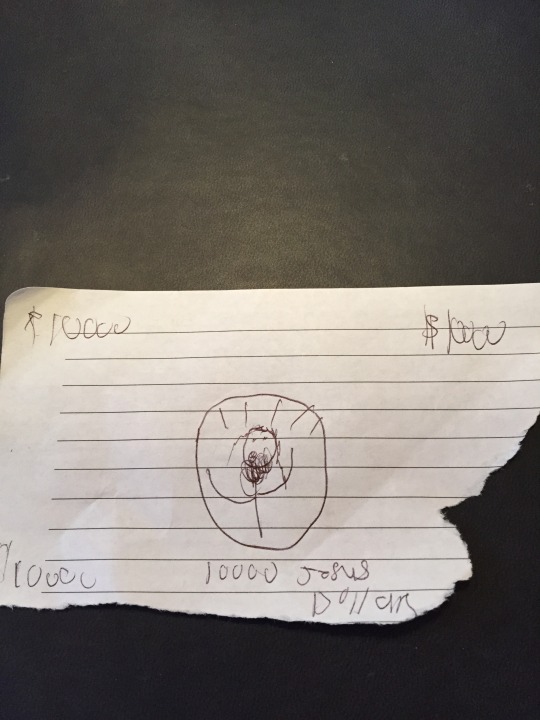 Me: “I know it probably doesn’t feel like a blessing to be mocked for your faith buddy, but the Bible says (and I paraphrased Matthew 5:10 & 11, as well as John 15:20a NIV) ‘Blessed are you when people insult you, and persecute you because of me.”  so these ‘Jesus Dollars’ are a blessing because Jesus says right after that  ‘Rejoice because your reward in heaven is great; for in the same way they persecuted the prophets…’  See your faith in Jesus and your willingness to live for His name and glory puts you in the same category as the prophets that went before Jesus.  That’s why Jesus tells us we can expect persecution ‘A servant is not greater than his master. If they persecuted me, they will persecute you also…’  There’s no amount of money that can buy you a great reward in heaven!  These ‘Jesus Dollars’ just prove that you have a great reward there waiting for you!”

Me: “Well, let’s pray that this boy gives you your money back, and that he accepts Jesus as his Savior at some point in his life.   While we pray, let’s also thank God that He is a God who knows mockery, persecution, and unfair dealings personally,  and for His great love for us, that He would undeservingly die as an innocent man to take our sin and give us a new life in Him!”

Have you been persecuted for your faith lately?

As Good Friday approaches I am so thankful to reflect on all that Jesus did and does for us!  May we all be willing to receive ‘Jesus Dollars’ with joy.

7 Secrets to Experiencing More Freedom in Your Life
Start Doing These 4 Things to Flourish, Thrive, Be Successful or Fortunate
Your Focus Determines Everything